In the 100th printed of LAIF magazine a variety of festivals all over Europe were suggested. As they like to party as well I got the chance to experience one of those festivals and so I traveled to Helsinki, Finland to experience FLOW Festival!

Flow Festival is not just another ordinary music festival. Surely the line-up includes many great bands like for instance Major Lazer, Diplo, Beck, Florence + the Machine and Pet Shop Boys during this years festival. The line-up also includes a variety of more experimental musical projects ans naturally many Finnish bands which are definitely worth discovering. Just the names of the band could make you curious. What to think of ‘Have You Ever Seen The Jane Finda Aerobic VHS?’. Another aspect of FLOW is the decoration which is typically Finnish with curtains from Marimekko and Fatboy’s for a relaxing sit inbetween performances. Apart from music there is also room for upcoming contemporary art-makers. This years art-exhibition included for instance a pair of artificial buttocks reacting on the sound of clapping and an installation to present the sound of photographic film.

An important aspect of FLOW is the effort of making the festival as sustainable as possible. Not just recycling the left-overs and garbage, a deposit-system for beer and soda bottles but also a free shuttle bus. A bus fueled by bio-diesel made from renewable feedstock, connecting the city to the festival.

The festival got a flying start on friday with performances by the Swedish Elliphant who got the crowd in motion. Especially her latest single ‘Love me Badder’ got a lot of airplay in Finland and was probably the highlight of her set. 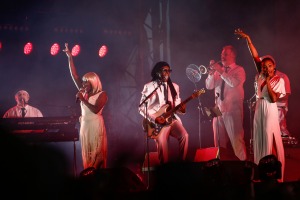 On the main stage of the festival soon after the wellknown producer Nile Rodgers took the crowd into a discopop adventure with his band Chic. Many epic tunes like ‘We Are Family’ (Sister Sledge) and ‘Let’s Dance’ (David Bowie) got the spectators in a happy and dancing mood. The most recent hit and collaboration with Daft Punk ‘Get Lucky’ got a special Chic-treatment. Although less up-tempo the crowd loved it. The first night came to an end with a blast as Major Lazer took over the stage. Confetti bombs, huge videoprojections, dj Diplo in a huge hamster ball running over the crowd and a guest-appearance of Elliphant completed the party.

FLOW returned on saturday around 2 o’clock in the afternoon with the tunes of Finnish dj’s in the cosy backyard of the festival. Soon after the Finnish summer came to life with music from LCMDF and French Films. The Scottish band Belle and Sebastian started the evening with its “twee pop” on the main stage but the excitement really came with Róisín Murphy. Her frequent costume changes, use of probs and vocals were unparalleled and didn’t bore a second. Just after sunset Pet Shop Boys started off their performance with ‘Axis’. Within 75 minutes they played many highlights of their 30 years in electropop. From ‘West End Girls’ to ‘Go West’. A feast of recognition with many (a)typical PSB-costume changes. After midnight it was time to get out the sunglasses again as Tiga took over the stage. A great set only to be coming to an end early due to technical difficulties during the encore.

Just after 2pm sunday afternoon the doors to the festival opened again. Not just for ticketholders but also for their kids as Flow also provided a Family Sunday at the Backyard where parents and their kids were entertained with music, circus and workshops. Soon after also the music program started. Norwegian Kakkmaddafakka played a fresh and energetic gig while flirting with the female Finnish audience. Best performances of the sunday still had to start. For instance my personal favorite, the Finnish K-X-P, whom played a none hour set of ecclectic psychedelic krautrock. Dressed up in habits their performance looked a bit sinister but really amazing. To get all cheered up again the DJ-set by Russian Nina Kraviz and Norwegian Todd Terje & The Olsens were a pleasure to listen to and see. Swedish Tove Lo attracted so much audience the tent she was playing was too small as almost half of the audience were standing outside. As festivals also have an ending FLOW had the luck of programming Florence + The Machine. Her performance, which was actually also the end of her current tour, was energetic, uplifting and a great finale of a great festival.

Flow Festival was a fascinating and exhilarating 3-day experience. This years edition completely sold-out and attracted 23.000 visitors to the amazing old industrial Suvilahti-area near the Kallio neighborhood. Especially during the performances of the headliners on the main stage it became apparent the maximum capacity of the area was almost reached. Standing close together and enjoying the music the audience still had the time of their live. It wouldn’t surprise me if the Finnish people invented the term “go with the Flow” as the crowd almost seem to flow from one stage to the other. For me it was at times a bit too crowded as I didn’t always wanted to follow the same flow. Being a sustainable festival it also meant the food had to be as sustainable as possible. They even had a contest for the best meal served. I had the opportunity to enjoy several including the one by Richard McCormicks which really was the best. FLOW festival in general is a fabulous festival with great music, food and atmosphere. The only real downside of the festival is it’s location. Being a festival in Finland the prices for food and drinks are above average. But the water is free.

Although the current location of the festival is perfect (it is near the city and easily accessible by public transport, bike or even on foot) the location of FLOW 2018 is uncertain as the area is part of a development-project in about 2 years. To experience FLOW in its current exciting and industrial atmosphere it might be worthwhile going there in 2016.. or 2017.
In 2015 FLOW Festival decided to spread the joy of Flow. The first edition of FLOW Festival outside of Finland took place in Ljubljana, Slovenia. With a succesful first edition with raving reviews it is likely the festival will return in Ljubljana next year again. Another FLOW you might want to check out as well!

More pictures of FLOW can be found here.